Last I checked, the word consisted of 7 letters and not 4, yet from the reluctance people show when it comes to using it? You’d think Support was a 4-letter word (and no, the word is not “G-L-A-D.”)

Support can be given in a variety of ways: Verbally. Physically. Spiritually.
It can be shown in something as grandiose as sky-writing or as simple as a text, “How you doing?”

It takes very little time out of one’s day to show care to another.
It can be as subtle as choosing wisely when confronted with more than one option (for a First World example: 2 Women, A & B; 1 Facebook, C. Which one should you give up? If you chose C, Facebook, you’d be correct. After all, Facebook doesn’t have feelings. Therefore, no chance of it being hurt by them. And if you’re among those who don’t really enjoy or care to use Facebook? Makes the choice kind of a “no-brainer.”)

Or it can be a red truck as grabbing the person into a bear hug and exclaiming, “I love you!”
(Keep in mind that a restraining order is determined by one’s level of attraction, so remember this when wondering whether or not to pull the bear hug move. When in doubt, a genuine smile that shows in one’s eyes speaks volumes and is R.O. safe. LOL. ?)

I wrote a small article for our local paper on Loving Day, a day that celebrates Interracial relationships and marriage, a day informally dedicated to letting Love rule… Yet some douchebag did his best to destroy it in Orlando, Florida. I couldn’t let that go in the small town in which I live without comment. So I did. I tried to keep it short, keep it focused, and end it on a loving, caring note. It was published in that Wednesday’s paper.

However, as of this blog post, mine is still the only voice speaking out from that long, skinny branch of our local Montana tree.

Not surprising. It’s really nothing new. Same thing happened here in 2012 when Blackface was permitted in the elementary school’s wax museum… at the exact same time it was happening in Colorado Springs. Yet apparently the only person who had a problem with it was me. Even inside my own family.

Sadly, depressingly, it wasn’t the first time I’d received little racial support within my own family, nor the last. That lack of support hurt me to the very marrow of my being. Worse, when it was suggested to me to “remember, they’re just kids” and “maybe you’re being a little sensitive about this”… It’s almost better to have none. And even though 4 years has passed since then, it still hurts. It hurts daily.

Being told to “Let it go” only adds salt to the wound by revealing the complete disconnect and lack of understanding between individuals, which is also painful, because it feels like the other party simply doesn’t care enough about you as a human being to even bother with wearing your shoes for just a moment.

I tried mentioning it, asking for support from those I’d thought would be happy to stand beside me, and hoping it’d offer a better understanding of me. Mentioned how that lack of support when so needed was so much more than a slap in the face… And was told, “I don’t see how a white man can help.” And, “I’m a pacifist.”

So was Martin Luther King, Jr. So was Ghandi. So was Jesus Christ.
Yet they still got shit done. 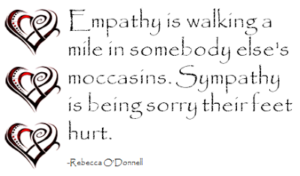 Hm.
E-M-P-A-T-H-Y.
Another 7-letter word.
Interesting, considering that 7 is a number considered sacred by many.

We need more of both.

And he still gives his love, he just gives it away
The love he receives is the love that is saved
And sometimes can be seen a strange spot in the sky
A human being that was given to fly
– Given to Fly, Pearl Jam

Pearl Jam… just has a knack for reaching right in and getting to the heart of my Matter. Sometimes I wonder why I bother to use my own thoughts at all. At least I know why I sometimes have to take a (rare) breather from listening to them; it’d be like attempting to swim to the bottom of the Ocean otherwise. *pop*
(You feel me?)

Been feeling the air currents shift; something fresh and new and smells good is coming in from West of here.

Been noticing it for a while now. Been feeling it against my skin.

Seems like confirmation when I learned a dear friend is moving back to Montana, to Missoula… Because I can’t help but feel that’s where the thread is coming from. How awesome that I’ll have a reason to go to Missoula now, and often. ?

And I know he’s reached my heart… in thin air

True Connection… It is a powerful and rare thing. Reaching out for it, takes strength and courage. It is not easy to find, even less easy to hold. Yet once grasped… there’s nothing like it and nothing else will suffice.
“I still try to run on towards All or None… All or None.”

Still… in the meantime, have to just breathe in the thin air.

And I know she’s reached my heart… in thin air…

Byzantine… is reflected in our pond.
There’s a cloud… but the water remains calm.
Reaching in… the sun’s fingers clutch the dawn to pass.
Even out… it’s a precious thing to bear.

There’s a light… when my baby’s in my arms.

“Have you the belief that the road ahead, ascends off into the light?”

Do you see the way that tree bends?
Does it inspire?
Leaning out to catch the sun’s rays
A lesson to be applied
Are you getting something out of this all-encompassing trip?

You can spend your time alone, re-digesting past regrets, oh
Or you can come to terms and realize
You’re the only one who can’t forgive yourself, oh
Makes much more sense, to live in the present tense

Have you ideas on how this life ends?
Checked your hands and studied the lines
Have you the belief that the road ahead, ascends off into the light?
Seems that needlessly it’s getting harder
To find an approach and a way to live
Are we getting something out of this all-encompassing trip?

You can spend your time alone re-digesting past regrets, oh
Or you can come to terms and realize
You’re the only one who cannot forgive yourself, oh
Makes much more sense, to live in the present tense

“Have you ideas on how this life ends?”

I think you will be rather surprised to hear my beliefs on the universe & how we came to be & how we will exit. (StarShine, August 3, 2012)

And I’m still waiting to hear. Guess I’ll wait forever which may seem like a mighty long time for some… and it sometimes does for me, yet I’ve also experienced forever as a folded pleat in time; it only took a small step, and I was there. It’s hard though, for I still want to know, I still want to be rather surprised.

Seems like this go ’round, re-digesting the past isn’t my problem; I look too much into the future which blurs my current line for there is always more than one variation of the future at a time to see. Perhaps I can try Pearl Jam’s advice, see if it helps. Don’t know if I can; I’m not built that way this time, but hey, can’t hurt anymore than it already does to try, right?

“Makes much more sense, to live in the present tense”